"The largest European carrier meeting for the global marketplace"

November, 2013: From the 18th to the 20th of November Steve Wilcox, Ben Nicklin, Rebecca Stani? and Ruth Plater grabbed their wooden clogs and headed over to Amsterdam to attend the ever-growing in popularity, Capacity Europe. Now in its 13th year, Capacity Europe has firmly established itself as "the largest European carrier meeting for the global market place" and with impressive attendance facts like 1,051 attendees from 364 companies and 71 countries, it's no wonder Capacity Europe has seen a 29 per cent growth from last year. The three day event started with the opening Keynote speech delivered by internationally acclaimed trendspotter Magnus Lindkvist, who highlighted the importance of being prepared for the future of the Internet and the next 'big thing' to hit the mainstream market. What will be the next Facebook, Twitter, or Skype and how we need to get ready for it. In the daytime, the IX Reach team members were busy flitting from meeting to meeting, and in the late afternoons and evenings they were attending networking events and socials creating a very busy schedule for all four attendees. Tuesday night presented itself with a slightly different social event; instead of the normal "men in suits and women in smart dresses", the game had been upped somewhat and the dress code was raised to a very formal "men in tuxedos and women in gowns" for the 9th Annual Global Carrier Awards. 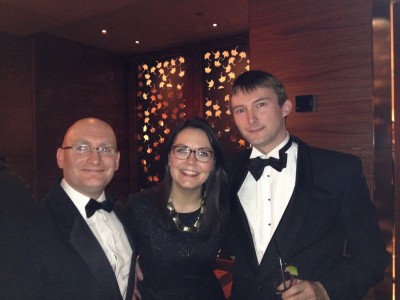