Last week the team headed to International Telecoms Week (ITW) which took place in Chicago for the fifth year in a row. ITW has become one of the biggest events on the calendar for the team and the telecoms industry as a whole, with delegates attending from a wide all over the world. This year was a particularly important and exciting event for the team as they were representing IX Reach upon arrival, but unveiled a new brand whilst in Chicago, so returned from ITW as Console Network Solutions (to read more about the rebrand see the press release here). VIP customers and partners were given the chance to see the new brand a day before the rest of the world by attending a Sunday afternoon social on Lake Michigan, Chicago. Guests stepped aboard the privately chartered Chicago Elite yacht and were given a sneak peak at the new brand. This also included a first look demo of the new Console platform with a presentation given by Al Burgio, CEO and Founder of Console Inc.

The conference began on Monday 8th May, with the team all having diaries packed with meetings for the full 3 days of the conference. As usual the evening socials gave the chance for everyone to network in a more relaxed atmosphere and catch up with industry contacts. For the third year in a row the team had the same booth (#1450 on the purple level), which became the centralised area for the teams' meetings. However this year the set up changed slightly and included a television screen. This was used to provide a sneak peek demo of the new Console platform. Blake Gillman was running the demos over the course of the three days to allow existing customers and prospects the chance to see how Console worked. Alongside all the meetings at the booth, there was a prize draw each day, which saw people put their cards into a fish bowl to be in with the chance to win either an Apple Watch or iPad Pro (image bottom right of Jon Reeson from NTT being presented with his iPad). 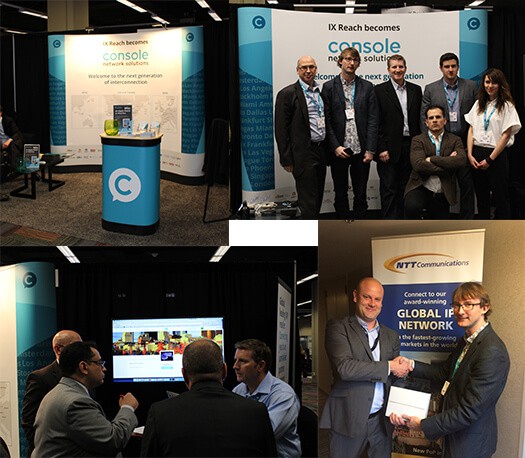